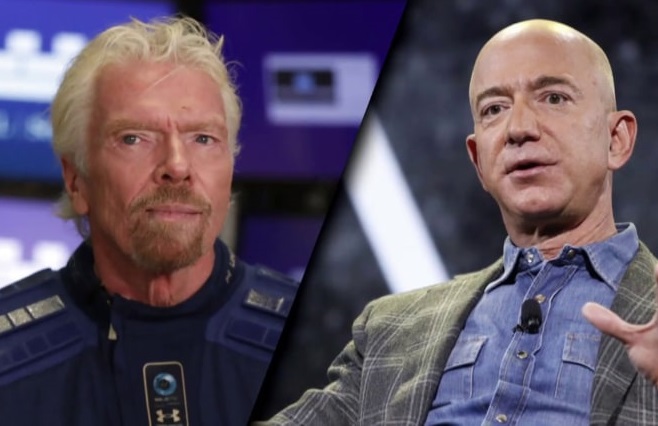 Virgin Group founder Richard Branson will travel to space on Virgin Galactic’s test flight on July 11 at 6 Am Pacific time, Virgin Galactic said in an announcement. The news comes amidst the Amazon founder Jeff Bezos’s space travel plans on Blue Origin’s New Shepard capsule.  His launch is anticipated to take place on July 20. This means that Richard would be able to become the first billionaire to travel beyond Earth’s atmosphere.

The Virgin space flight mission will carry two pilots, three specialists, a full space crew, and the founder. Dave Mackay and Michael Masucci will be the two pilots of the aircraft, Lead Operations Engineer Colin Bennett will look over the cabin equipment and procedures, and Chief Astronaut Instructor Beth Moses will oversee the flight journey. Sirisha Bandla, Vice President of Government Affairs and Research Operations at Virgin Galactic, will evaluate the human experience in space. Her evaluation will be based on the experiment from the University of Florida.

Virgin’s VSS Unity Spacecraft’s successful flight would unleash the new era of space travel.  This will be the 22nd flight test for VSS Unity and the fourth crewed spaceflight for the company. Virgin Galactic will broadcast the spaceflight on VirginGalactic.com. “Our next flight—the 22nd flight test for VSS Unity and our first fully crewed flight test—is a testament to the dedication and technical brilliance of our entire team, and I’d like to extend a special thank you to our pilots and mission specialists, each of whom will be performing important work. Tapping into Sir Richard’s expertise and long history of creating amazing customer experiences will be invaluable as we work to open the wonder of space travel and create awe-inspiring journeys for our customers,” Michael Colglazier, CEO of Virgin Galactic said.

Virgin Galactic announced last month that Federal Aviation Administration (FAA) updated its existing commercial spaceflight operator license.  The company had the license since 2016. The green light to the approval provides the company a license to open the doors for space tourism. Its third crewed spaceflight was carried out in May. More two test flights are remaining until the company can start its commercial service, which is expected to start by 2022.

Statement from the Billionaire Entrepreneur

“I truly believe that space belongs to all of us. After more than 16 years of research, engineering, and testing, Virgin Galactic stands at the vanguard of a new commercial space industry set to open space to humankind and change the world for good. It’s one thing to have a dream of making space more accessible to all; it’s another for an incredible team to collectively turn that dream into reality. As part of a remarkable crew of mission specialists, I’m honoured to help validate the journey our future astronauts will undertake and ensure we deliver the unique customer experience people expect from Virgin,” Richard Branson said.

The “Unity 22” mission will be carried out in the same way earlier Virgin Galactic spaceflights were executed. The rocket-powered VSS Unity will be detached from the plane at an altitude of 80 kilometers. Richard Branson will undergo the training and preparation as of the space company’s future astronauts. “I’ve always been a dreamer. My mum taught me to never give up and to reach for the stars. On July 11, it’s time to turn that dream into a reality aboard the next @VirginGalactic spaceflight,” Branson wrote on Twitter. In one of the tweets, the billionaire wrote that on the return from space, he will “announce something exciting” that will give chance to more people to fulfill their dream of becoming an astronaut.

Unlike Richard Branson, who will be the only passenger on the spaceflight, Jeff Bezos will take his brother along, and a lucky winner who will fly with Jeff Bezos. The lucky winner will be paying USD 28 Million to become the passenger for the flight. Moreover, the flight will have an extra passenger named Wally Funk. She’s the first graduate of NASA’s Mercury 13 program. However, her mission was canceled. Now, after 50 years, her dream to fly in space would come true.