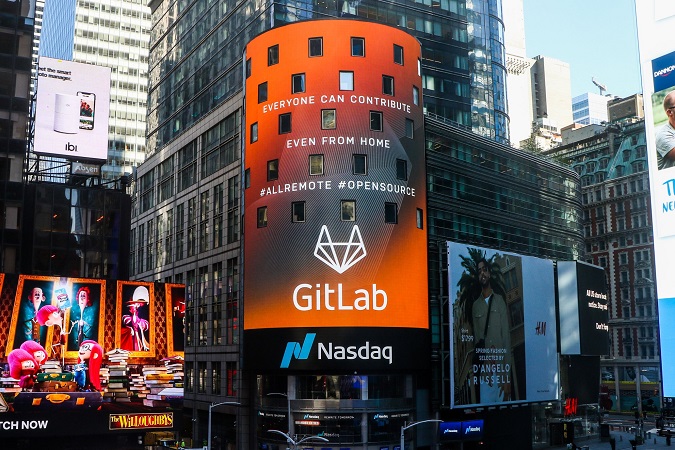 The US-based open-source DevOps platform GitLab made its debut on NASDAQ on Thursday. In just less than a week, its valuation has reached USD 16.5 Billion. This is twice the market valuation of its competitor GitHub, which was acquired by tech behemoth Microsoft for USD 7.5 Billion. GitLab planned to price its IPO at USD 77 per share. However, it made its public debut with USD 94.25 share per price.

The repository company founded by Ukraine-based developers kick-started its funding journey after four years of its foundation. It was a humungous investment of USD 100 Million by private equity firm, Andreessen Horowitz. In 2016, it bagged USD 20 Million from August Capital. A year after it announced USD 20 Million funding, which was led by Alphabet’s GV. The news of the funding hit the market just before GitHub’s annual developer conference.

GitLab operated remotely a lot before the COVID-19 took over the globe. The company doesn’t own a single square foot under its name. It used to hold its board meetings at co-founder and CEO Sid Sijbrandij’s apartment in California. “We would all be sitting around his kitchen table, and he had a cat that would be in his bedroom meowing to come hang out,” said Dave Munichiello, a general partner at GV, said.

GitLab was part of YC’s Winter 2015 batch, and it’s also its maiden open source company that has gone public. “By building his company in the light of day, Sid has taught countless other founders and entrepreneurs about company-building. As a guest at YC’s Growth Program, Sid has dazzled other YC founders with this dedication to his principles of openness and transparency. GitLab Inc. was a remote company prior to the pandemic before remote-first was commonplace or cool. In fact, few people believed that Sid could take a remote-only company all the way to an IPO,” YC said in a blog post.

Even though GitLab is now valued twice GitHub’s acquisition price. It has a fair amount of financial challenges. GitHub is operating under the hood of Microsoft, which is using the platform to scale its cloud business segment, Azure. Moreover, it’s providing GitHub services at lower prices to gain more market share. “GitLab’s dependence on one revenue stream, subscriptions, and licenses to its DevOps platform, is a major competitive disadvantage as it attempts to compete with profitable companies that have many other revenue streams to support loss-leaders,” wrote New Constructs, a market research firm.

The company’s valuation was a mere USD 6 Billion prior to the IPO. Its stock blasted 49% in just two days of its public debut. GitLab reported a revenue increase of 69% year-over-over in its second quarter. The company only had USD 276.3 Million in cash on its balance sheet before it went public on NASDAQ. GitLab spends its maximum revenue on sales and marketing to increase its customer base. Thus, the company reported a net loss of USD 40.2 Million in its quarter ending in June 2021. According to its prospects, its 383 customers spend over USD 100,000 on its tools and features annually.