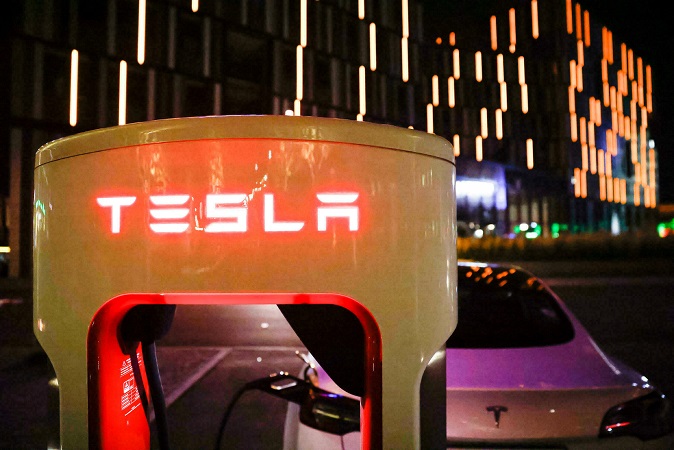 Tesla CEO Elon Musk said on the weekend that the gigafactory in Berlin would start production in few months. The announcement made was not on Twitter, but the company organized an event that included techno music, Ferris Lights, and food for fans. Thousands of fans attended the event. The ‘Giga Fest’ tickets were offered to 9,000 people, while residents of Brandenburg state were given the first priority.

Thousands of people welcomed Elon Musk’s arrival on the stage. During his time on the stage, he revealed that “We’re aiming to start production in a few months, basically, November or December, and hopefully deliver our first cars in December.” He also put forward the challenges of running the factory. Musk said that even though the “production is kind of easy part. The hard part is reaching volume production.”

He said that the company is planning to produce up to 10,000 vehicles every day and manufacture battery cells. Tesla has already submitted plans to invest over USD 6.9 Billion. However, the plant approval has not been given it. The construction of the plant is protested by hundreds of local residents and environmental groups. According to the opposition, the construction of the gigafactory would bring in hazards to animal species and create drinking water issues. Musk responded to the critics, saying that the battery production will be “sustainable” and would use “relatively little” water.

Currently, Tesla is constructing a preliminary stage of the plant, which expands to 740 acres of land, which it purchased for USD 50.25 Million.  The plant is expected to have a capacity to produce 500 million battery cells with a total capacity of 50 gigawatts hours (GWh) annually. This is more than Volkswagen’s 40 GWh plant, which is under construction, at Salzgitter. According to Brandenburg’s economy minister, the chances of gaining approval is around 95%, Reuters reported. Tesla aims to hire around 12,000 employees at the plant.

The employment will boost the economy in the eastern part of Germany, which has been struggling with high unemployment rates. Even though many of the local environmental groups are against the construction, there are some political parties that are in favor of the construction. “We’re in favor of a shift towards emission-free mobility and the cars needed to achieve that must be built somewhere,” a member of the Green Party, Ralf Schmilewski said. He added that the Berlin gigafactory will support the younger generation.

Another Major News by Tesla

On Saturday, Tesla reported the delay in the rollout of the Full Self-driving (FDS) Beta 10.2 software. The software was expected to be rolled out on Friday to more than 1,000 Tesla owners. Tesla has been testing the FSD software for more than a year despite National Transportation Safety Board (NTSA) concerns regarding safety. “A few last minute concerns about this build. Release likely on Sunday or Monday. Sorry for the delay,” Elon Musk wrote on Twitter.

Another big change. Tesla is changing its headquarters from Bay Area, California to Austin, Texas. On the shift, Musk said that change was inevitable as there’s a limit on “how big you can scale in the Bay Area.” Moreover, the growth of the energy business would be easier in Texas. However, he clarified that “to be clear we will be continuing to expand our activities in California.”