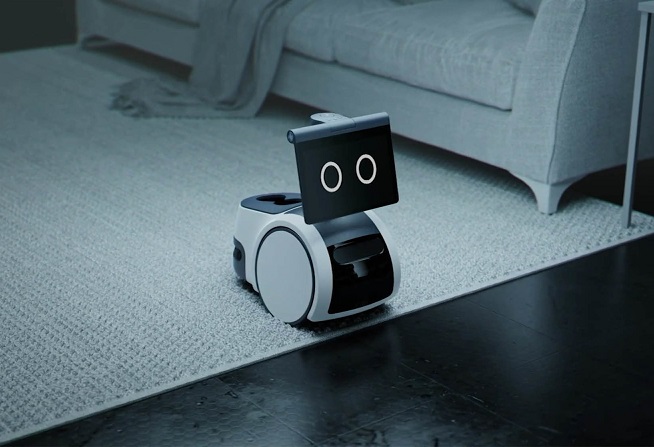 The e-commerce giant Amazon unveiled its puppy-sized home robot on Tuesday during its 2021 hardware event. It has been named Astro and can be bought for USD 999.99 However, it won’t be accessible to everyone at first. The product is only available to one with the invitation from Amazon itself. Astro, a robot on three wheels, will act as a mobile virtual assistant and can perform an array of tasks, which include delivering items from one end of the home to another.

Following its establishment as an online book store, it has brought in a lot of third-party products, which include furniture, clothes, electronics, and daily essentials, among others. To increase its profitability, it has brought in its own products under the tag “Amazon essentials,” and ventured into various businesses and services, such as cloud computing, home automation, and space. Now, its Day 1 Edition product, Astro can be seen as a blend of its different services into one.

Astro can map the whole house, recognize faces, and bring out the objects that can be fitted into its customizable trunk and sent to a specific person or room. The trunk has a payload capacity of 2kg (4.4lbs). On the front side, it has a medium-size camera with empathetic eyes. The screen is attached to a telescopic neck that can be raised up to 42 inches. Earlier, the robot was seen as Echo Dot on wheels, but Amazon Senior Vice President, Devices & Services, Dave Limp claimed that it is more than that. It won’t hear you and parcel your items at home but will provide security to house members. The homeowner can deploy Alexa Guard Technology that will alert members if there is any suspicious noise.

“In five to 10 years, we believe every home will have at least one robot. They’ll become a core part of your everyday life,” Limp said. “We learned early on that customers don’t just want Alexa on wheels. To that end, we embodied Astro with a unique persona that’s all its own. From adding eyes to the display, to a whole host of sounds, the device really comes alive.” Amazon is known for integrating industrial robots in its fulfillment centers to make one-day delivery possible for its Prime members. The extension to the home will help it to expand its market share.

Astro can charge itself from zero to 100 in just 45 minutes, and after that, it can enjoy a stroll of two hours. Even though the company revealed that it will be powering its future products with an in-house AZ2 Neural Edge processor, Astro has been powered by Qualcomm chips. The company revealed the introductory price of USD 999.99, but it is expected to go up to USD 500 as it is available for everyone. The product will come with a six-month trial of Ring Protect Pro that provides a home security system. Astro weighs around 20 pounds.

What was more launched on hardware event 2021?

Amazon partnered with Honeywell Home to develop a smart thermostat, which is energy efficient. This product will be compatible with HVAC systems and is priced at USD 59.99. This thermostat is integrated with Alexa and regulates temperature automatically. Moreover, it also unveiled Amazon Echo Show 15, which is embedded with an AZ2 processor. It has a 15.6-inch screen that can be mounted on a wall or on the stand. It can be used for streaming music, videos, and for video calling. When not in use, it can be used as a photo frame. Echo Show 15 is available at USD 249.99.

In addition to all this, it has introduced Ring products, ranging from just USD 49.99 to USD 139.98. Amazon also dropped in USD 79.99 fitness watch that has fitness workout plans and nutritious meal planner. Moreover, it has launched an interactive and video calling device for kids named Glow. It’s more than a video screen. Amazon’s Glow projects 19-inch touch-sensitive space that helps kids to engage in virtual activities with their parents.