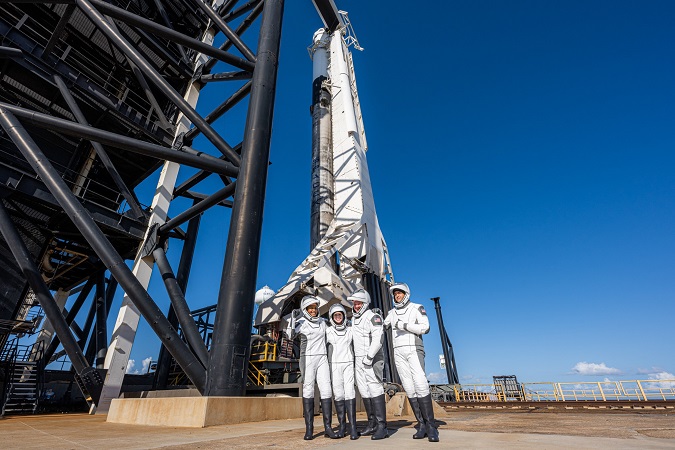 SpaceX launches its first-ever private crewed flight to space on Wednesday, marking its milestone in the aeronautics industry. One of the key highlights of this mission is that the mission doesn’t have any professional astronauts onboard. This flight was made possible with help of SpaceX’s Falcon 9 from its 39A Launchpad at NASA’s Kennedy Space Center.

The rocket fled at 8:02 PM ET, setting an example that space will be open to tourists who can afford the travel. Inside SpaceX’s Dragon Resilience capsule, four individuals are there who will be spending three days circling the earth’s orbit, before coming back to Florida this weekend. Out of the four people, one is the billionaire entrepreneur Jared Issacman. He is a founder of a payment processing company, Shift4 Payments, and also a trained pilot.

Issacman sponsored the other three individuals on board. One of them is Hayley Arceneaux, a 29-years old physician assistant. Along with him are Christopher Sembroski, a data engineer, and Sian Proctor, a former NASA astronaut candidate.  “If we’re going to go to the moon again and we’re going to go to Mars and beyond, then we’ve got to get a little outside of our comfort zone and take the next step in that direction,” the billionaire told the reporters.

The mission, also called Inspiration4, serves a greater mission than changing the face of the space travel industry. This private-crewed flight will be a multimillion-dollar fundraiser for St. Jude’s Children’s Hospital. Issacman has already donated USD 100 Million to the non-profit research center, but with this mission, he aims to raise another USD 100 Million. Talking about the mission, the four travelers have spent four months, getting ready for any kind of emergency. The training included practice in SpaceX’s capsule simulator and a tiring trek in Snow.  To enhance the experience for the crew, it has installed a glass dome to give a 360° view of the space.

The Dragon capsule and crew are in a nominal orbit,” SpaceX engineer Andy Tran said. Nearly after nine minutes, Falcon took off, its first stage booster returned to Earth. The capsule separated just after it left the left Earth’s atmosphere. The capsule is expected to complete one orbit every 90 minutes, witnessing 15 sunrises and sunsets every day. The Dragon Spacecraft will be orbiting 375 miles above Earth. “The crew of Inspiration4 is eager to use our mission to help make a better future for those who will launch in the years and decades to come,” Issacman said in a statement.

During the flight, the crew members will be performing medical experiments for “potential applications for human health on Earth and during future spaceflights,” the company said. After arriving from the trip, the Translational Research Institute for Space Health (TRISH) at Baylor College of Medicine and investigators at Weill Cornell Medicine will collect the biological samples to study the effects of microgravity on the body.

Elon Musk-led SpaceX is the third company that has launched its private-crewed spaceflight. Richard Branson’s Virgin Galactic and Jeff Bezos’s Blue Origin has already propelled its private-crewed mission to space this July. Unlike Blue Origin and Virgin Galactic’s mission, SpaceX’s flight is not hovered by any professional astronaut, but it is operated by ground-based space stations.