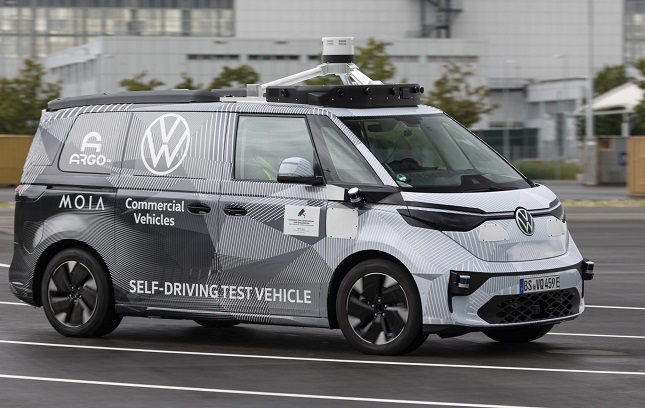 Various auto manufacturers are investing millions of dollars to leverage their market position in the electric vehicles (EV) industry. One more segment that has encouraged companies to bet their money on, is the self-driving cars market. The prominent 80-years old company that is partnering with an autonomous technology company to leverage its market position is Volkswagen.

Volkswagen’s standalone unit Volkswagen Commercial Vehicles has partnered with Argo AI, a US-based self-driving technology company, to develop fully electric and self-driving vans. Both the companies revealed their first ID. Buzz test vehicle on Sunday. The self-driving van is expected to be used for robotaxi service in Germany by the year 2025.

The ID. Buzz will be one of the first planned test self-driving cars. Its vigorous testing will be done in Argo’s development center in Germany, which will be tested for stringent European rules and policies. Argo AI has built the nine-hectare testing ground near the Munich airport. Volkswagen estimates that its self-driving car will be ready within four years to start picking and dropping its passengers. The self-driving van will be running on MOIA’s ride-hailing platform. MOIA is the largest EV-hailing service in Europe. It’s also a subsidiary of Volkswagen Group that works with public transport providers to provide mobility solutions.

Talking about the technicalities of the self-driving van, Arndt von Bieren, a senior hardware engineering manager at Argo AI, said that “One of the major differences of the ID. BUZZ compared to a normal car is the roof, which is huge, and provides a lot of flexibility for integrating Argo Lidar and other sensors.”

An environment recognition system from six lidar, eleven radar and fourteen cameras, distributed over the entire vehicle, can capture much more than any human driver can from his seat,” Christian Senger, head of autonomous driving unit at Volkswagen, said at the event. The company introduced the concept of Buzz ID in 2017 as a camper van.

“Building on our five years of development and learnings from our operations in large, complex U.S. cities, we are excited to soon begin testing on the streets of Munich in preparation for the launch of the self-driving commercial ride-pooling service with MOIA,” said Argo’s founder and CEO, Bryan Salesky, in a statement. The firm acquired Princeton Lightwave in 2017 to embed highly accurate sensors in cars. Argo AI’s CEO said this acquisition will help the company to achieve self-driving capability in complex environments.

“We get to work hand-in-hand with your product-development team — there are no walls between us, it’s very transparent — and we talk through exactly what the right way is to integrate this technology together,” Salesky told Herbert Diess, Chairman of the Management Board of Volkswagen Group. “Other partnerships, people are getting shipped cars, they tear them down, they build them up again with the tech, and they don’t really know what they’ve done as a result,” he added.

Argo AI does not only support the Germany market but also has its presence in the US to foster international release. With the presence of its teams in two international markets, the track team at Munch can effectively and send the data points to engineers in Western Pennsylvania. The track engineers examine the data and provide insights on the development.

Argo AI is heavily funded by auto giants across the globe. The company has raised around USD 2.6 Billion from Ford and Volkswagen alone. Moreover, the company expects to raise more money by going public next year. Argo AI has partnered with Ford to deploy electric and self-driving cars on the Lyft platform by end of 2021. Lyft plans to launch 1,000 autonomous vehicles on its network over the next five years. Under this partnership, Lyft will also get a stake of 2.5% in the autonomous technology company.