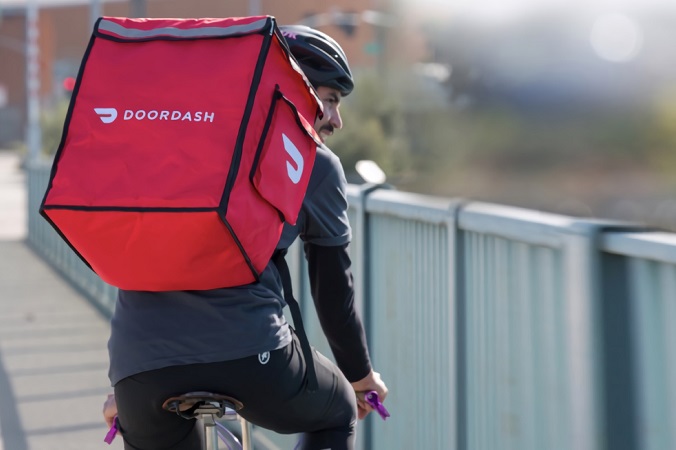 DoorDash workers in California were seen protesting outside the company’s CEO Tony Xu house on Thursday. The protest was instigated after the California Superior Court ruling called Proposition 22 unconstitutional. Prop. 22 was passed for approval in November last year to overrule the state’s AB-5 law, which in turn, will allow companies such as Uber and DoorDash to classify their workers as independent workers than employees.

A group of around 50 gig workers that are associated with advocacy groups Gig Workers Rising and We Drive Progress were demanding transparency on tips and pay of at least USD 17 per hour. They were seen protesting against unfair deactivations and asking for free personal protective equipment (PPE) and sanitation kits. “Dasher concerns and feedback are always important to us, and we will continue to hear their voices and engage our community directly,” a DoorDash spokesperson said, reported Tech Crunch.

Rondu Gantt, a gig worker, that has been working for more than two years said he gets paid as low as USD 3 per hour from Doordash, while almost 60% of the earnings comes from tips.  He says that the drivers need to sustain unsafe driving conditions and conveys that it’s difficult to make a living out of it. Gig Workers Rising says that the DoorDash workers have received little to no safety support. Moreover, the drivers get a reimbursement of 80 cents to keep themselves safe. However, a spokesperson of the company said that drivers are entitled to receive a free PPE kit weekly.

DoorDash workers, also known as Dashers, say that they are not sure if the tips received by them are fully received by them. Last year, DoorDash paid USD 2.9 Million to settle the lawsuit of 2019, which stated the company is stealing driver’s tips. The lawsuit was filed by Washington DC Attorney General Karl Racine alleging that between 2017 and 2019, the company reallocated millions in tips instead of sending them to drivers. Under this settlement around USD 1.5 Million were sent to delivery workers.

DoorDash reported a record-breaking quarter concluding on June 30, 2021. Even though the company posted USD 102 Million in net losses, the company reported USD 112 Million in terms of adjusted EBIDTA. The most eye-catching part of the report was that the firm paid USD 413.67 Million, which includes salary and stock options. The rally outside his house is clear that the gig workers want Xu to share his wealth.

A Lawsuit from Chicago

The company announced in a blog that the City of Chicago has filed a lawsuit against it for indulging in unfair trade practices. It titled the news as “baseless.” DoorDash says that the lawsuit is a waste of taxpayers’ money and “disappointing” given its ongoing partnership with the city. It said that it has reduced its commission and donated USD 500,000 to help the restaurants amidst the grueling COVID-19 outbreak. The lawsuit alleges that the company is adding restaurants to its platform without consent.

Uber, DoorDash, and Lyft, among others, have spent more than 200 Million to pass a law that avoids classifying independent contractors as employees. If the bill passes in California, it will be a huge relief financially for these companies. “Prop 22 ensures corporations like Uber and Lyft won’t be held accountable for their actions and have no responsibility for paying workers a living wage or providing them with any protection,” Gig Workers Rising said in a statement last year.