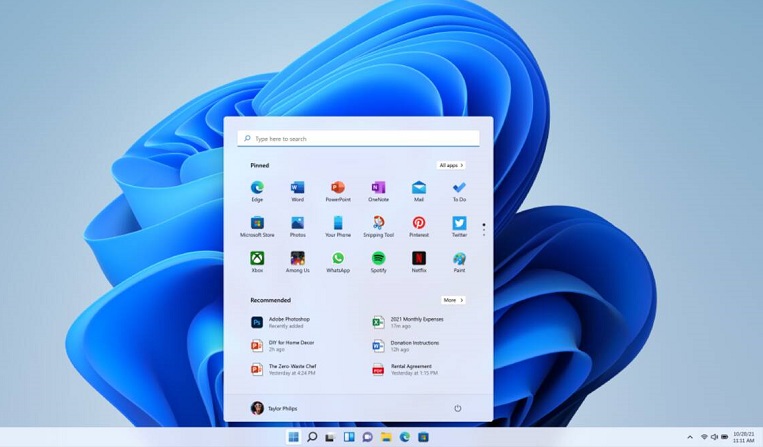 Microsoft announces the launch of Windows 11 on Thursday. The company says that it comes with the power and security of its predecessor, but has a refreshing look and new tools and apps that enhance the PC experience. The new operating system (OS) focuses on simplifying the user’s task and improving multi-tasking. “Today marks a major milestone in the history of Windows,” Microsoft CEO and Chairman Satya Nadella said. “It’s the beginning of a new generation.”

Even though the tech giant unveiled Windows 11 first look yesterday, a leak of the interface was surfaced last week. Its screenshots were first published on the China-based search engine Baidu. One of the first things that are noticeable on the new OS is the start menu and the start button. The Windows 11 look is quite similar to Windows 10X, whose launch plans were canceled. The wholesome taskbar has a centered interface, which is often seen in Mac OS.

Microsoft was earlier working on Windows 10X OS that focused on improving dual-screen features. “Instead of bringing a product called Windows 10X to market in 2021 like we originally intended, we are leveraging learnings from our journey thus far and accelerating the integration of key foundational 10X technology into other parts of Windows and products at the company,” said John Cable, head of Windows servicing and delivery.

The Start menu drops live tiles on the click, which is quite inspired by Chrome OS or Android launcher. A similar design was first seen on Windows 8. On the start menu, there are various options that comprise recent documents and a recommendation panel. Moreover, there’s a separate search bar that floats on the top of the start menu interface. Windows 11 also comes with light and dark modes that provide an enticing look to the OS. The software maker has also integrated “Snap Groups” that lets the users remember where they have stored their apps.

Windows Updates has always been time-consuming, and it would interrupt the user in the middle of the work. However, Windows 11 enables the updates in the background and has made it 40% smaller than the earlier versions. Earlier, Windows used to integrate Skype to allow users to call and message friends, co-workers, or family. Now, it comes with by default Microsoft Teams that provides the same services.  Windows 11 also have a universal mute button that enables mute of the microphones across all the apps.

Microsoft has now become one of the prominent players in the gaming industry. Windows 11 have strived to bring the experience of the Xbox to the users. Xbox executive Sara Bond confirms that Xbox’s Auto HDR feature will be available to the new OS. The feature allows adding high dynamic range (HDR) to Direct 11 and DirectX 12 games. Windows 11 also brings in the DirectStorage feature from Xbox Series X / S. Additionally, it has integrated Xbox Game Pass, which has become possible due to the Xbox app.

One of the big changes that Microsoft has brought in is the support of Android apps on Windows. The company has partnered with Amazon and Intel to bring the feature to the users. Microsoft has integrated the Amazon App store that effortlessly brings Android apps on the OS. However, popular apps such as Gmail, Google Maps, and other Google services are not available in the store. During the launch, the US-based company demonstrated the use of TikTok on Windows 11. Currently, the company has not unveiled any released date, but it has confirmed that it will be a free update for users.

Microsoft Take a Shot at Apple

Microsoft’s Chief Product Officer Panos Panay said that the company’s payment processor will only charge 12% of developers’ in-app purchases. He added that developers can keep 100% of purchases if they integrate their own payment processor. Conversely, Apple charges a 30% fee on the in-app charges. “Today this world needs a more open platform,” Satya Nadella said at the event. This was another shot on the Apple, which has its own confined ecosystem.