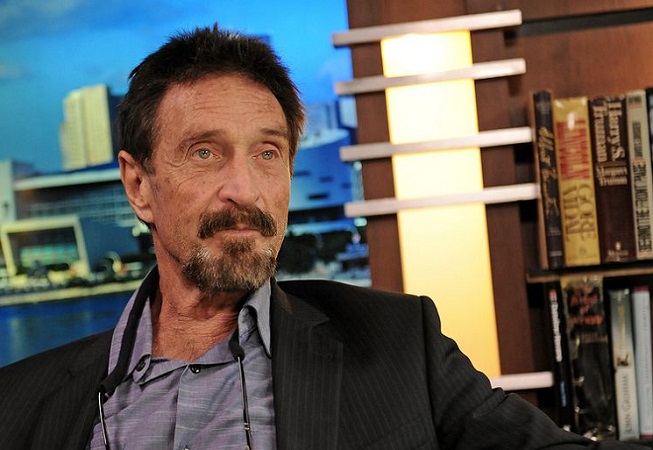 The anti-virus software creator John McAfee found dead in a prison in Barcelona, Spain on Wednesday. He was waiting for the extradition to the US to face tax evasion charges. He is suspected to die of suicide, by apparently hanging himself, his lawyer said. MacAfee’s death was confirmed just before the National’s court approval of extradition.

According to his lawyer Javier Villalba in Spain, McAfee’s actions toward suicide were owing to his intolerance to being locked up. According to El Mundo, a Spain-based newspaper company, the medical professionals tried to resuscitate him but failed. A statement from Catalan Government says that “A judicial delegation has arrived to investigate the causes of death.” It continued that “Everything points to death by Suicide.”

Nishay Sanan, McAfee’s lawyer in Chicago, said “Confirmation has come from our legal team in Spain that John was found dead in his jail cell.” He added that “I am saddened to hear of the events and my prayers go out to his wife Janice.” Sanan addressed in a statement that the software mogul was a fighter and will always remain the same. He continued that John was a patriot but the US government “made his existence impossible. They tried to erase him but they failed.”

In October 2020, McAfee was arrested for tax evasion charges from the International airport in Spain. The maximum sentence for the crime can be up to 30 years.  Following his arrest, he tweeted “I am content in here. I have friends. The food is good. All is well. Know that if I hang myself, a la Epstein, it will be no fault of mine.” His death follows the death pattern of Jeffry Epstein, the millionaire investor, and alleged child trafficker, who hanged himself in the federal jail in the US in August 2019.

According to the US Department of Justice, McAfee earned millions out of consulting, promoting cryptocurrency, speaking at events, and selling life story rights. “From 2014 to 2018, McAfee allegedly failed to file tax returns, despite receiving considerable income from these sources,” the Department said last year. In addition to tax evasion, he was charged with pumping and dumping the cryptocurrency price. “McAfee Team members collectively earned more than $2 million in illicit profits from their altcoin scalping activities,” the Justice Department said in March 2021.

On June 16, 2021, McAfee tweeted his association with cryptocurrency troubles. “The US believes I have hidden crypto. I wish I did but it has dissolved through the many hands of Team McAfee (your belief is not required), and my remaining assets are all seized. My friends evaporated through fear of association,” he wrote. John was linked with another man named Jimmy Watson, who’s allegedly part of the pump and dump scheme.

John McAfee, a software programmer and businessman, started McAfee Associated in 1987 and sold his stake in the company after seven years. In August 2010, Intel acquired McAfee Associated for USD 7.7 Billion. Later in 2014, Intel announced that it will be discarding McAfee’s name from the product name, changing it to “Intel Security.” However, John sued Intel over copy infringement. In 2017, Intel and McAfee did a settlement in which the multi-millionaire agreed to not associate himself with cybersecurity products or services.

In 2012, he fled from his home in Belize after police started questioning him about his dead neighbor. John denied his involvement in the case, but he claimed that his decision to flee was out of fear for his life. McAfee was asked to pay USD 25 Million in damages over his neighbor’s death.  In 2016, he announced his presidential run and his goal was to win the nomination for the president from the Libertarian Party. However, after he failed to get nominated, he addressed that “I don’t want to be president, I really don’t, nor could I be.”

John McAfee’s old tweet had an image of his tattoo, which reads “$WHACKD,” has gained the attention of Twitter. In the related tweet, he wrote that “Getting subtle messages from U.S. officials saying, in effect: “We’re coming for you McAfee! We’re going to kill yourself”. I got a tattoo today just in case. If I suicide myself, I didn’t. I was whackd. Check my right arm.”